So, today the director came down to engage with the prototype team, as she usually does at 4:30 on a thursday. If its regular she puts it in her diary and only needs 30 minutes. I follow it up with a debrief after.

Progress feedback of a service redesign to a senior manager

Normally senior managers expect reports. When I start work on a service design I say that there will be no reports from me. Eh??? What I will do is feedback on our progress once a week, the Show and Tell, on a thursday at 4:30. The manager slightly gasps… I continue, it is to replace the report, and you will find that the engagement will be much better than what I can write in a report. If after some time you need a report I will write one. 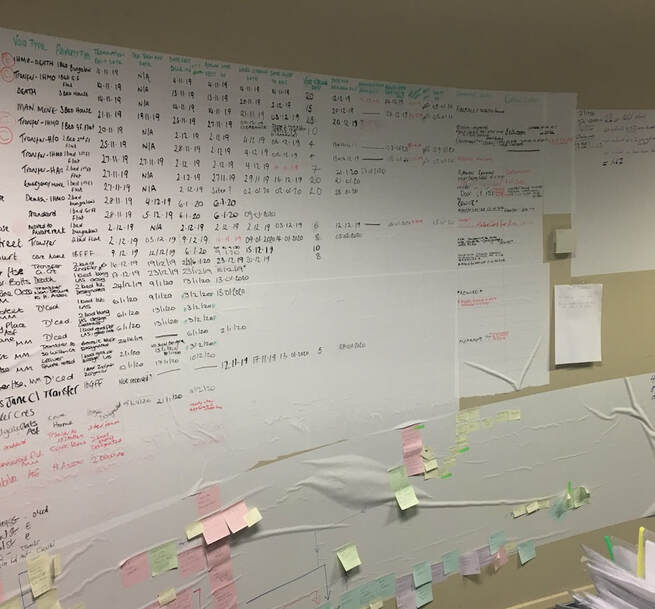 The first time she does it, I have a couple of minutes with her before she starts.So, we start and after 30 minutes its complete, we move somewhere to have a chat. What did you see? what did you learn? Was there anything that concerns you?
We talk lots; she is gushing about lots of things she has seen for the first time. A team working together, questioning things, learning, asking questions. She also had a couple of questions for me about why did the manager not answer questions the team had? The answer is that the team are still learning, so the manager is letting them.

Anyway, the Director put the Show and Tells into her diary and does now not want a report! She comes every week.

This is about learning to be a systems leader

So, the Director always comes away, to debrief with me, with questions. And she always comes away with a surprised look on her face. She said today; I come down and I think that I am going to see conclusions, things getting resolved, but it is always more complicated than that. I think to myself, she is learning about systems leadership!

One of the big cornerstones of management is measurement. The great backbone of Command & Control. So, the Director was starting to push the Voids team by saying that it is good that the end to end time is coming down. I talk to her after. So, lets talk about the end to end time, and dissect.

What is happening is that the Voids flow is now getting delayed. Why?
Link 1 — Because the team are starting to focus on getting the end to end time reduced, and are starting to cut corners.
Link 2 — And the contractor supervisor is highly stressed. Why? Because we are pushing him to reduce end to end times. Thats good isn’t it?
Link 3— The supervisor has no control over the resources he has, and both we and his managers are pushing him to reduce end to end times.
Link 4 — He will simply leave if this carries on. We need to go to their directors, not push the supervisor.
Link 5 — Dont forget we are still in Prototype, which is about trying to get it all working and robust. The end to end time will come down, but only if we focus on what we are doing to improve the flow.
What are you doing behind the scenes? We are working on the causes of the end to end time.
Oh yes, I can see now thats the right thing to do. And why is the contractor not able to keep up? The director has learned to focus on causes, not on the thing itself.
Link 6 — Well, the contract specified 20 voids a month, and we are giving them 30. Now I can see that by pushing them it achieves nothing, maybe we need to renegotiate as it is unfair on the contractor.
Well, lets look at the voids on the wall tracker.
​Link 7 — Most of them are Transfers. Oh, why do we have so many Transfers? I dont know, but maybe we should look at why, we might simply have too many because of something Housing Allocations are doing — Link 8.
So, instead of solutions, the director has a load more things to think about! (Systems leadership is not as easy as Command & Control!)

So, we have learned that we need measures that focus on the causes of cost, and we want to see if the end to end time will go up or down.  Its up to us managers to find out why. The team cannot control the causes of the end to end, so when you push them for it to reduce, they will find ways that are counter to what you want to happen. Ha, thats counter-intuitive! says the Director. It is, it is looking at this as a system, rather than simply fixing problems.

The Director says; Its funny, whenever I come down here to Voids I think we are making progress, and there is always something else! And I realise that she is learning that systems management and leadership is:So, the Director is on a path of discovering that each week there is more to learn, more to unlearn about her current behaviour, and that this is a much better way of working that will produce something long term, sustained, efficient and effective.
Once the Director has had invovlement with the team, learning, she ceom around on her own and ask:
"What am I seeing?"
"What happened?"
"When did this change and why?"
"Is this good, shall we do more/amplify; is this bad, shall we do less/dampen?"

Logic of what I am helping the Director to see
The question now moves from how to I deal with each of these things separately: cost, turnaround (end to end), and quality?
To understanding the relationships between them, and find out how they interact with each other, and find out the drivers that affect them. Once I have done that, I then focus on the drivers.

To cut costs, manage the drivers of cost

The principle of learning systems leadership is through doing. The re-design is in progress and systemic leadership development comes as part and parcel of the re-design. It is based on a type of action learning cycle. And the mindset change from Argyris & Schon.
Learning is suited to that particular person, at the pace that is right for them. It focuses on the management outlook that they have (spiral dynamics). The emergence of learning is iterative. It is learning from the work, and backed up by some theory when appropriate. Above all it helps them to develop a systems thinking lens to view their service as a system, and the role that they themselves and everyone else plays.
It focuses on mindset and worldview, with an understanding that develops of systems thinking concepts through action, rather than in a classroom.
The learning is suited to the workplace that they are in. And it absorbs complexity by dealing with it directly with a team.
The end result is a leader who will see systems rather than a machine. They will become comfortable with uncertainty and accept ambiguity as an aspect of the system, and resist reductionism and command and control.
The team will welcome the new leadership style.

How does it work in the wider context?

In the methodology that I use:
It is important to retain holism, because it then forces the leader to construct connections, and always realise systems.
It is important to embed the leader into the actual work within their organisation, because I wish to go through normative action learning learn-unlearn cycles connected to the work.
It is important to immerse the leader in learning through direct experience, because that can alter mind-set.
It is important to help the leader to witness how their decisions have led to unintended sub-optimal results, so that they can begin to realise that their current mindset and thinking is not as robust as they thought.
I do use classroom based sessions to then back up what they are seeing with theories and constructs that helps them to make sense of what they are experiencing. This then ties in the theory with the actual, and they can then see a robust way to create their own new competencies that replace the old.
Once a leader has gone through that, then perhaps in the methodology I use, the leader emerges with a sense of Leadership as a new fundamental competence. And then they might see it as a leadership style. However, their leadership is completely reliant on the system they are in now. Another system may well need other leadership competencies, although I would hope the mind-set remains a constant. I have taken a manager to see another organisation, and they totally understood it from a systems thinking perspective from the first moments — I had to censor her gasps!
Back to List of Examples