What is the context?

In England, as in most countries, local government councils are responsible to allocate housing to those members of the public who are in need of housing. Around 2002 an approach that was copied from The Netherlands, was brought over to England, and tested. It was brought in because the old system of allocating housing was different in each area, and the public had no idea how fair it was. There was also a feeling that the person in need should have the choice as to the location and type of house they could have.
​
The government at the time liked it, and they called it Choice Based Lettings (CBL). This system is still in place for 98% of all local government areas.

The manager and a team of front line staff got together to look at understanding the workflow as experienced buy the service users.

Looking at the start of the workflow, after the initial contact from service users, the majority of further contact was by letter. Just to get past the front door to be accepted took months. Each application generated huge efforts of logging, processing and filing across the three IT systems.

Kim Tugwell, Home Select Case Worker, said that spending all day ‘processing application forms’ felt like being ‘on a treadmill never getting anywhere’. The system also generated hostility and almost 10% of applicants appealed against their banding. For the team, the deeper learning then followed quickly after.

​The folly of banding

Banding is the term that means the groups that customers were put into once they had been assessed. There were three categories; gold, silver, and bronze. The first major learning point was that the Gold priority banding did not mean that you would be housed any quicker. It took on average up to 30 months to be housed.

Housing need
The next thing that astonished the team was when they began to speak to people on the waiting list. Many of them were not in housing need (56%); they could be removed from the list. Two thirds of all people that were contacted, had out of date records.

More learning came when they began to understand the amount of activity that the CBL process generated. Of the 105 properties advertised 2,600 bids were received.

It became clear CBL users had little choice or control, just the illusion of control...

The next discovery emerged gradually. It is a lesson about closely understanding demand. One housing applicant (Ivy) made contact during the trial. Ivy wanted to move to a one-bedroom bungalow. Her application form included a medical form guaranteeing a higher banding. This would have secured Ivy a silver band classification and allowed her to bid online. One-bedroom bungalows are rare and there were very few in her chosen location. So, she would never be housed adequately and she will remain on the list in the expectation that a house may become available.

So conditioned were the team, that it took a great deal of debate and three phone calls to truly understand what mattered about how a service could best be delivered to Ivy. As the team asked her more questions, they learnt that Ivy actually loved the house she was living in, but could not afford a gardener to maintain the garden. Her mobility was gradually being reduced over time. Her real need was help with her garden and to stay in her home, so the team arranged for a voluntary group to do the gardening for her, allowing her to continue to live in the same property, where she was happy.

The assumption in the workflow design was that everybody who made contact did so because they wanted a house, making the assumed purpose of the service ‘I want a house’. When the team began to listen carefully and ask questions,

what they found was that many people who made contact were actually suitably housed but needed a different housing related problem solved.

The application form and the system design ensured that people making contact never really got to speak to a human being. All demand (100%) got translated into ‘give me a house’.

Previously, all applications were turned into demand for a house. In reality only 15% of that demand had a high housing need. High housing need of itself does not mean that that the solution should be social housing. Often people asking for help only wanted assistance with a deposit, so that they could move into private accommodation, or needed help to solve a dispute involving a private landlord. There are a huge range of solutions that can be tailored to solve each particular problem.

The real demand into the system might even suggest that the housing crisis that we are warned of is perhaps not as bad as it might seem. This knowledge is only possible because staff were free to have conversations and understand what the real problems were and what mattered to service users. Gone are the application forms and the multiple and expensive IT systems that stopped people listening and understanding.

​Even though Great Yarmouth ended the Choice Based Lettings scheme that drove so much failure and cost into the system, and that stopped them from helping the people that they were there to serve. Freeing staff to both understand and then become creative in helping people resolve that problem releases huge energy and creativity. It turns staff from paper shufflers back into human beings. Only people, not IT, has the ability to absorb the huge range of demand that is presented in human service systems.

Over time, the waiting list dropped from 6000 in 2010 to 309 in 2015. The Home Select team have a new purpose now expressed in customer terms: ‘help me solve my housing problem’.

Home Select Manager said that the job is now much more satisfying as it is about ‘getting out there, building relationships and understanding people’.

What has been the impact?

​What have been the key elements of success?

What has been learned?

The big finding about this is that the service had been inadvertently designed to ration properties and make people do awkward activities in order to prove how in need they were. This was to protect the system from a public who would be devious enough to exaggerate to get a property. It was an inside-out designed system.

The application form was the perfect embodiment of this thinking: a long document that asked questions designed to sift out lies, with little or no relevance to the real problem that people needed help with. In fact the application form acted like a very basic front-end, unresponsive and bureaucratic. The real finding is that people told the truth and they generally wanted help to solve a problem.

​The logic that follows that realisation leads to a dramatic re-orientation of the mind-set of the staff, and most importantly the managers. The team realised that the application form could not be a reliable method for understanding people’s real problems. Only human beings can deal with the variety of demand presented by service users.

Implications for other Councils

Transformation like this case study is not recommended for every organisation. Each council can examine its own services – and their impact on those in need, then decide themselves how far they want to go in re-designing their services. In Yarmouths’ case, they decided to change every part of the service and remove CBL. That may not be the right solution for your organisation.
Audio - What it is like now

Articles from this Case Study

How Norfolk council has cut its waiting list, The Guardian 10 April 2018

Are, in general, the main three elements of Service Design. Systems thinking and Lean were methodologies that were also included. What I did here was to get a team together, and I then took the team through each of the elements. So, the first thing we did was to:
​
Demand
FlowValuePerformance
Somehow the team had to understand how well they were doing as a service, and the only way is to measure the success of the customers. The team created capability charts of the end to end time that they had to wait before they were housed. The average time was 2 years, and it was the same for all the banding.
​ 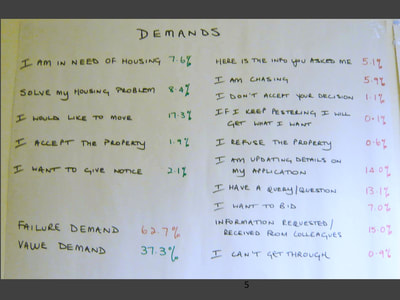 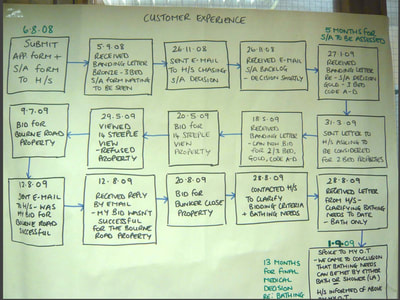 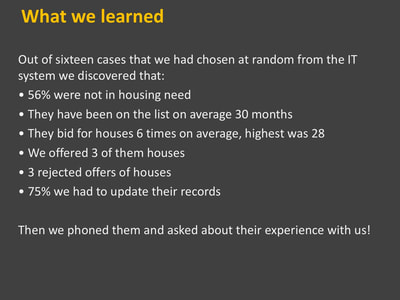 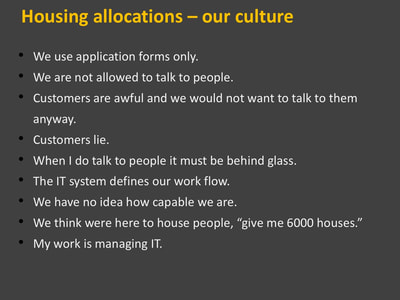 The team started with  new set of principles, to create a prototype of a new way of working. In the end they took 35 cases and worked them through to the end.
The outcome was a completely new way of working. Gone were the forms, nd the computer workflow system. Gone was the website. Everyone who enquired got the attention of a member of staff. 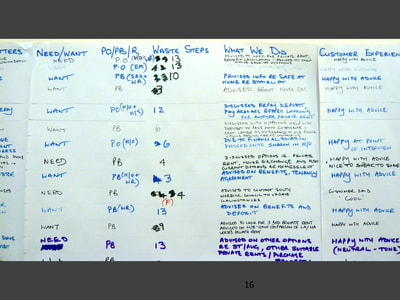 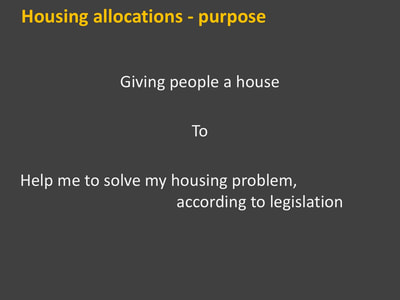 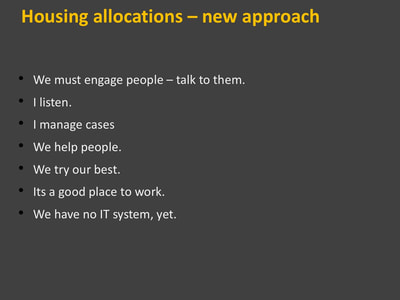 The outcome to the Council was an increase in helping people and a decrease in resources used. 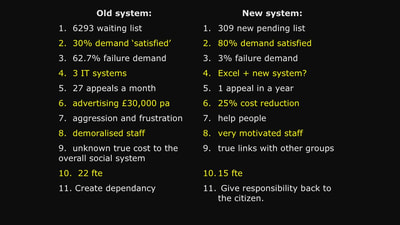 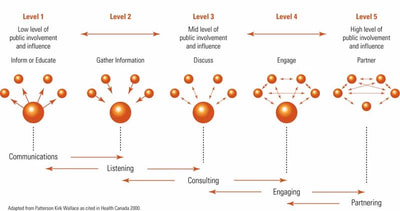